Banana Snacking Cake (or is it really Banana Bread?)

I found a recipe in a recent issue of Cooking Light that I just had to try.  It was called Banana Snacking Cake (click on the link for the recipe name for the recipe), and since I always have brown bananas hanging around I figured I'd put it to the test.  The recipe was very simple to put together and baked up beautifully. 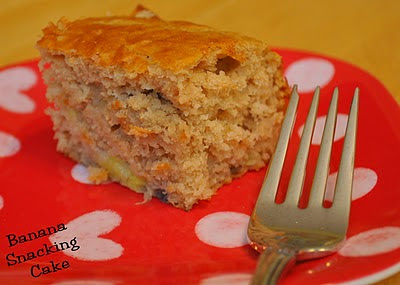 The cake stayed nice and moist even a few days later.  I had My Oldest who happens to be the banana bread connoisseur try it.  He thoroughly enjoyed it and even asked that I make it again with some other add-ins... maybe blueberries next time... or even chocolate chips.  I think this recipe will lend itself well to variation. 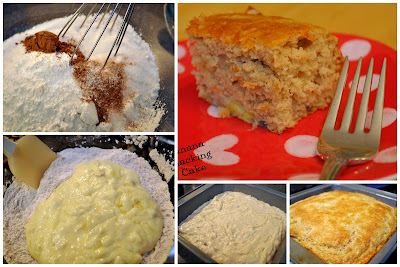 While this was a tasty recipe, calling it cake could be debatable.  It's baked in a square pan so yes, it looks like  a cake, but it really tastes like another solid banana bread recipe.  Truly it makes no difference what you call it because it is a moist, delicious cake.

I guess this will be my current go-to recipe for using those brown bananas that gather on my counter each week... at least until I find the next banana bread that I need to sample!

Sandie {A Bloggable Life} said…
Hi, Patsy! I like what you're doing with your blog! And I know what you mean about this recipe, "Or is it really banana bread?" I have a banana cake recipe too, and to me, it was still a banana bread. Either way---both are yummy! Have a happy Thanksgiving!
November 23, 2010 5:36 PM

Shelby said…
I tossed over this one myself! I ended up taking the Banana Fosters Bread and changing it up and turning that into a snack cake that was more like a cake....made me wonder if it would really be like bread if I had made bread!
November 25, 2010 9:48 AM