Last week was My Husband's birthday and as it approached, My Boys wanted to know what they could get for his gifts.  This is always an interesting conversation since we don't let them buy us gifts, and always ask that they make us something.  It could be a card, a craft project, or something else that appeals to them.

My Oldest has tired of writing cards at 12 years old, but has a new interest in baking.  At first he wanted to bake him a cake, which was a great idea... pretty simple to find a recipe that he could make on his own.  As it got closer, he changed his mind to donuts.  The change is completely related to his fascination with The Simpsons - between the show that has been on for over 25 years to the comics he's collecting, he loves everything related to The Simpsons.  So, vanilla donuts with pink glaze and sprinkles became the creation for this year's birthday. 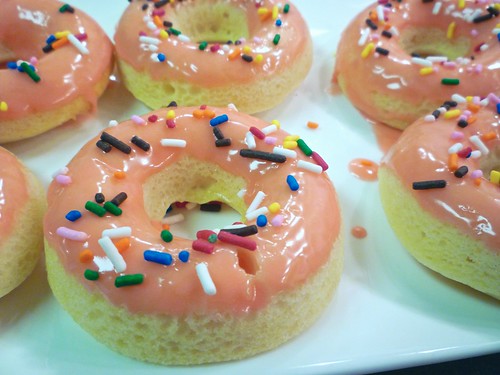 I was not willing to fry up donuts, because we have been working hard at eating healthy and the idea of having a large pot of oil just to make donuts on my stove really didn't appeal to me.  I wanted us to be able to indulge without feeling quite as guilty.   Treats are always welcome, but if we can enjoy without adding unnecessary calories that's the way I'll go.

I found a 6 cavity donut pan and gathered ingredients for My Oldest to get started.  I love that he prefers to bake from scratch now that he's getting more comfortable in the kitchen!  He recognizes the taste difference between packaged foods and what I make at home, which is a very good thing.

The donuts were a snap to put together and the pan worked beautifully!  I did have him spray the pan with cooking spray first to ensure that they would pop out nicely.  I think it was most exciting for him to see that once he made the glaze and it turned pink after a couple of drops of red food coloring... as each donut was dipped and then sprinkled, they looked EXACTLY has he wanted them to!

Overall, the donuts were a hit with everyone!  I think I'll be making donuts the next time we have their friends sleepover... yes, they were that tasty!

Please note that all photos and content belong to Patsy Kreitman, unless otherwise noted. If you want to use something please ask first.
Email Post
Labels: Appetizer Dessert Kid Friendly Quick and Easy