Tribute to the Queen of All Daring Bakers, Lis #daringbakers

Way back in 2008, I was still fairly new to blogging and always looking for new ways to connect to other bloggers and learn new things.  That was when I discovered the Daring Bakers (now known as the Daring Kitchen).  Sadly, one of the groups original founders passed away suddenly earlier this week.  Lis of La Mia Cucina  was part of the early world of food blogging and today, many of us who were touched by her either through her blog, the Daring Bakers or in some other way joining in to share how she made us better bakers, cooks or bloggers.

This group began as a way for food bloggers to stretch themselves and try new baking techniques that they might not try on their own.  When I signed up to participate, I was warmly welcomed by to the group. She generously advised me on how the group worked and what I needed to do to join in on the fun. 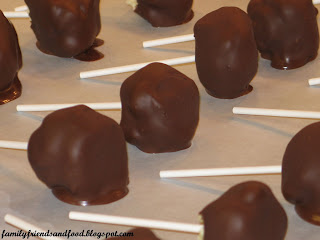 What was so appealing about being part of this group was the camaraderie and support when something failed or didn't turn out quite as expected.

My first foray into the group was the Chocolate Cheesecake Pops - the photo is rather uninteresting, but I was thrilled to be able to post my experience making this recipe.

I was not cut out to be a Daring Baker for long, as can be seen by my truly awful attempt at the Opera Cake challenge.  My world was apparently busier than I remember it being back then and one mistake after another caused my cake to be lopsided and incomplete at the time I was able to post it.  Besides learning from my mistakes, I think what was best was hearing from the others in the group that they had been through similar catastrophes with their baking as well.

I ended up having to drop out of the group since I'm terrible about making things on a deadline, and Lis was so sweet when I sent her the email telling her that I'd be leaving the group.  She said I was welcome to come back if I ever wanted to... and I've been tempted because the challenges have been truly intriguing.

Lis and Ivonne created a group that made this huge world much smaller through baking.  Lis was always encouraging and you could see her smiling through her emails when she would answer questions.  I never had the pleasure of meeting her "in real life", but will always remember that she was part of the duo that brought together a world of bakers that felt like they were next door rather than thousands of miles away.

Those of us who had the pleasure of interacting with Lis through the Daring Bakers / Daring Kitchen or in some other way will always remember her sweet way of encouraging you through every mis-hap in the kitchen and every success.

Please note that all photos and content belong to Patsy Kreitman, unless otherwise noted. If you want to use something please ask first.
Email Post
Labels: Daring Baker misc Tribute to Lis