We've got some Saucy Drumsticks!

When you have a night at home with the family, what would you make?  Even though I knew we'd have time for a sit-down dinner at home tonight, I only had a vague idea of what we were having.

Last weekend, I made a trip to the produce market with My Youngest who decided that the fresh string beans looked good enough to bring home... too bad he remembered after tasting them that he's not a big fan.  I give him credit for trying them anyway... and it gave me a chance to use up the diced pancetta I had in the fridge. Oh well... back to the drawing board!  I will find a way to prepare them that he will eat them... eventually.

I've also been trying to switch up some of the dinners I've been making.  The last month or so, I've gotten into a bit of a rut when it comes to dinners and My Oldest seemed to have noticed because he told me that my dinners weren't as creative as they used to be... meaning we were having the same things week after week.  With something different thrown in on rare occasions.  Let's just say, my cooking mojo went on vacation for a bit.

Tonight's dinner wasn't anything super over-the-top, but it was a nice change of pace from the usual sauteed chicken or sausage & peppers that have made a few too many appearances lately. 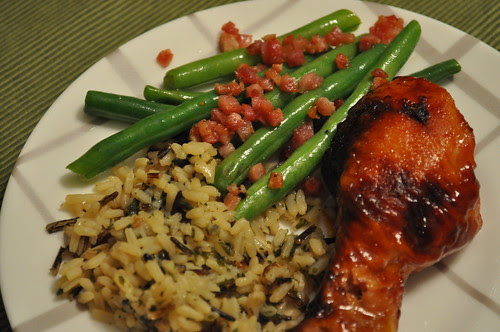 The kids love eating drumsticks, so I had picked up a package of them when I was grocery shopping last weekend.  I envisioned a thick, sticky coating of barbeque sauce on them, and that was exactly what we got.

One of the things I want to try to create this summer is my own Kansas City-style barbeque sauce.  In the meantime, I continue to use KC Masterpiece because we enjoy the flavor.  To ensure that the sauce would be sticky enough, I combined 3/4 cup of KC Masterpiece with 1/4 cup of honey... yep, this was sweet and there were fingers covered in that sauce while we ate dinner.  I just love watching My Boys eat food like this - it's fun kid food!

To bake the drumsticks, heat the oven to 425 degrees.  I sprinkled a bit of Kosher salt over them before baking for 30 minutes.  Then, we brushed the sauce on one side and baked for another 15 minutes.  Then, turn them over and brush the rest of the sauce over the top and bake for 10 more minutes or until juices run clear.

The result will be beautifully browned and saucy drumsticks!  You'll be licking your fingers while eating dinner!  This is a night at home kind of dinner, but if you pair it with some quick and easy side dishes you can enjoy some extra time with the family while the drumsticks bake.

I will be sharing some fabulous food we enjoyed while celebrating a special birthday & anniversary last weekend... so, be sure to check in later in the week!

I really like how the chicken turned out from your pic. I can never get mine to look like that in a million year. good job on that.

These look good! I was in such a deep rut myself...still trying to climb my way out!