Seems that I've fallen into a bit of a rut when it comes to dinner lately.  How did I finally realize this?  Well, My Oldest informed me that I haven't been very creative with dinner lately.  Then, I mentioned I was going to make some chocolate chip cookies... which proved his point, apparently.

Rather than go crazy trying to find something he would like to eat for dinner, I asked him what he would like to have and the answer was Twice Baked Potatoes.  I had to ask a few questions to make sure I knew what he was looking for when it came to flavor and ingredients... the boy does know what he likes, so it's better to get it straight from him. 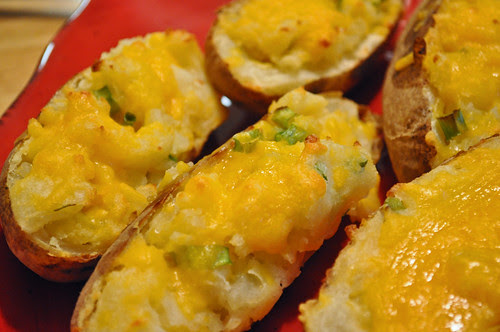 After a bit of discussion, it was determined that they should have some cheesey goodness in them and he did ask for some of the "square meat" in them... which meant diced pancetta.  With those instructions I went on a search for a recipe to use as a guideline.


I ended up on the Food Network website and used THIS RECIPE created by Melissa d'Arabian (winner of Next Food Network Star - my favorite that season).

The recipe was a cinch to make, which was a good thing because I had to have My Oldest assist since I ended up burning my arm when making a sauce for a new salmon recipe that was really not worth sharing here... so, it was a double annoyance!

He scooped out the insides of the potatoes and mashed them up really well before adding the cheese and the scallions.  Due to my kitchen mis-hap, I didn't get the pancetta browned up this time, so had to skip that ingredient this time (note that this was an addition we were making, and not part of the original recipe).

After he filled the potatoes back up, they were placed in the oven for their 2nd time which allowed them to heat back up and melt the cheesey goodness.  After 15 minutes you add the rest of the shredded cheese and then let that melt into the potatoes... can you say, YUM!  So simple, even for a weeknight - as long as you have time to bake the potatoes.  I think you could prep these potatoes the day before and then finish them off in the oven the next day, if time is a premium that day.

Following the basic instructions for this recipe, you can indulge your flavor cravings... perhaps change the cheese to suit your mood... maybe try Bleu cheese instead and serve with steak, or try something Italian inspired with a sprinkle of Italian seasonings with some shredded Parmesan and mozzarella... let your imagination and creativity take over! I know I'm going to be trying to do more of that in the coming months!

Please note that all photos and content belong to Patsy Kreitman, unless otherwise noted. If you want to use something please ask first.Pin it code:

Now that's a boy who knows what he wants! And he's also gotten ME craving some cheesy goodness!

What a smart kid - I would request this side dish time and time again too! So good!