Like many other busy families we keep a supply of frozen foods in the freezer for those nights when getting dinner on the table needs to be no fuss.  One of those frozen "desperation" meals has been a box of taquitos that we bought at Cotsco.

They are ok, but never really crisp up the way they should and tend to have more spice in them than the boys enjoy.  I love a crisp taquito (or flauta depending on where you are ordering them) topped with sour cream and guacamole.

About a week ago, I was asking my husband if there was anything he wanted me to get from the grocery store he mentioned the ingredients for flautas.  He had been checking out various food sites and figured it couldn't be too hard to make these for lunch. 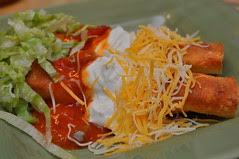 This was one of those Sunday lunches that we made that required both of us to be involved.  After My Husband started working with the corn tortillas and rolling them up, we found that they needed to be heated a bit longer before working with them.  Once we had them heated properly, they were quick and easy to roll up.  While My Husband got started with frying them up, I finished up with rolling the rest up -- some just had chicken and some were a combination of chicken and shredded cheese.

Since the flautas we made were so simple, there really isn't a specific recipe to share, but rather a method. 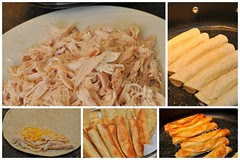 First, My Husband pulled off and shredded the meat from a rotisserie chicken.  Next, we heated the corn tortillas, wrapped in a cloth, for about 2 minutes.  Most of the flautas were just chicken, but a little bit of shredded cheese can be rolled up with nice results.

Once you have the flautas rolled up, heat about 1/4 to 1/2 inch of vegetable oil in a large skillet until it's hot (add a small piece of chicken to the oil and if it starts to fry right away, you will know it's hot enough).  Add the flautas, but be careful not to overcrowd the pan.

Allow to fry on each side until nice and golden brown.  Remove to a bowl lined with paper towels to drain prior to serving.  Repeat until all flautas have been cooked.

Serve with an assortment of condiments: shredded lettuce, shredded cheese, sour cream, salsa, guacamole - you are only limited by your imagination!

I love that your husband took the initiative in making these homemade! They sound WAY better than storebought!

That does look like a little bit of work, but I bet they are wonderful! We have been making our own tortilla chips lately, can't go back to store bought chips ever again! I will bookmark this recipe for the next time we are feeling ambitious!

I just made those the other night - so simple, but do take a while to put together - although I only made six, my hubs and each had 3 - so crispy good!

I sometimes buy the Costco ones too and am always a bit disappointed. I need to give this a try.

These look wonderful! I've tried the frozen one too and they just aren't too good. How nice to have your husbands help!

These are on the "must make" list! I would like to make a ton and freeze my own!