Last night, it was just me and My Boys since My Husband was invited to go watch a basketball game with a couple of friends.  Dinner on nights like that is usually something simple as I take it as a chance to do something a bit less involved.

I had picked up a few things at the grocery last weekend with an idea in mind as to how I would use them.  Some shredded mozzarella, pizza sauce, mini pepperoni and crescent rolls.  Nothing too crazy, but I was thinking I could do some kind of "stuffed" pizza puff for dinner.  And a bonus was that the crescent rolls had double Box Tops on them!

Fortunately, my idea paid off really well!  In the time it took to preheat the oven to 375 degrees, I had the crescents seperated and filled with the pizza ingredients.  Once I had them rolled up, I baked them until they were golden brown. 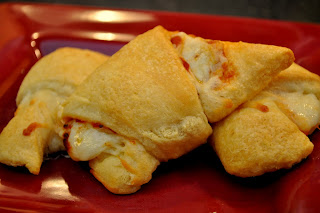 Can you see the cheese oozing out of them?  I got major compliments from My Oldest - the one who used to eat anything and has suddenly decided to become picky!  He told me these were a "definite make again" meal.  I only made one tube of the crescent rolls this time, but imagine doubling it up next time would be a good idea... they would also make a fantastic appetizer to share when watching March Madness (if you are into that kind of thing... I'm not, but I won't judge you!) or any time you are gathering with friends.

Directions
Preheat oven to 375 degrees.  While the oven preheats, cover a baking sheet with aluminum foil.  Then, open the can of crescent rolls and separate into the perforated triangles.  Add a small amount of pizza sauce to each triangle - about 1-2 teaspoons (much more will make them soggy).  Then, add the pepperoni pieces to each triangle - about 5-6 pieces.  Sprinkle generously with shredded mozzarella.

Starting at the widest end of the triangle, roll up (carefully!).  Bake for 12-15 minutes  - until golden brown.  Allow to cool slightly, serve warm!

Joanne said…
My parents and I are getting together this weekend to celebrate my sister's birthday. And they are totally quick pizza puff kind of people. Totally love this!
March 10, 2011 8:09 PM

Aggie said…
Wow, these are great and I agree with the others on great party food and afternoon snack! I have to try these out on the kids soon...I am so hungry for one right now!
March 14, 2011 5:11 PM