Who IS the Tooth Fairy (and Petite Turkey Meatloaves)

A couple weeks ago, My Oldest was determined to try to find the truth behind who really is the Tooth Fairy.  He tried leaving a note for the Tooth Fairy, which was never responded to... because, well, the Tooth Fairy is very busy every night and doesn't have time to respond to questions like "Are you real?".  His goal was to try to compare the handwriting to mine and My Husband's to determine if one of us was doing the Tooth Fairy duties.  Soon after that note, he lost another tooth... yes, the Tooth Fairy has been visiting our house a lot the last month or two.

So, with this next tooth he spent some time that evening really questioning things.  I told him that if he doesn't want to believe anymore, that's his choice but the Tooth Fairy doesn't visit kids who don't believe.  He still wasn't convinced.  That night, something unthinkable happened... the Tooth Fairy NEVER came!  Picture an 8 year old boy marching into his parent's bedroom at 5 a.m. in the morning and literally shaking the "tooth pillow" in his mom's face and stating: "The Tooth Fairy didn't come!"  Yikes!  How do we correct this one?


Well, we told him that perhaps the Tooth Fairy had a full schedule of kids to visit and maybe just didn't get to our house that night.  So, we suggested he put the tooth pillow back under his pillow and surely that night he'd get the visit. That afternoon when he got home, he decided to check on the tooth... and guess what?  The Tooth Fairy visited while we weren't home!

Soon as he discovered that the Tooth Fairy had come at a time when it could not possibly have been Mom or Dad, he said that "The Tooth Fairy has to be real!  She came when you and Dad weren't home!"  Innocence and belief have been restored - at least for now.  Whew!

I'm not just sharing a bit of life here today, but also a recipe that I found at Skinny Taste recently.  My Oldest loves meatloaf.  Which is kind of funny, because none of the rest of us are terribly crazy about it.   He's been asking to have it again for quite awhile... so, I went in search of a recipe that might possibly please the whole family. 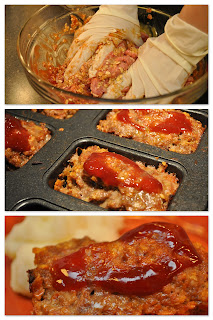 Since he was the one who was so intent on having meatloaf, I put him to work making the mini loaves.  He did a fantastic job and they turned out moist and tasty.  I did end up with 5 rather than 4 mini meatloaves... and no leftovers!  Next time, I will make a double batch and freeze the extra so that whenever he is in the mood for meatloaf I can easily accommodate the request.

You can find the recipe HERE at Skinny Taste.  Gina has a fabulous site filled with tons of Weight Watcher friendly recipes, and she has the nutrition information for each recipe and points values, too!

Email Post
Labels: Life as I know it Poultry

Shelby said…
This post so reminds me of when Justin was questioning Santa...and I hated to have them lose that excitement so young...and the magic returned when Santa gave them a Gameboy each when they KNEW mom wouldn't do it because she was so against them! ;)
January 16, 2011 3:25 PM

Jamie said…
What a cute story. Keep them believing as long as you can. We love meatloaf but have never had turkey ones or the mini ones. Would be fun to make them in the mini loaf pans.
January 23, 2011 9:19 PM