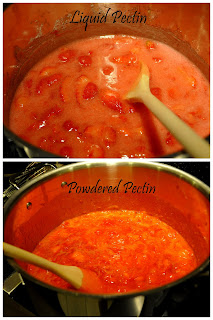 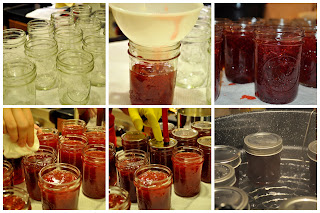 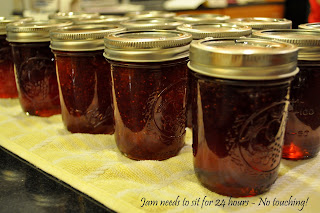 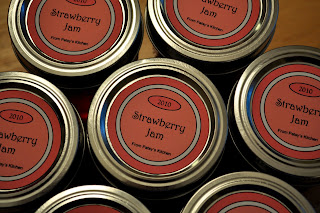 Lyndas recipe box said…
What beautiful jars of jam! I used to watch my mother can too, but didn't take the time to learn how. I've been thinking about it lately as homemade just tastes so much better. Thanks for the post Patsy.
September 06, 2010 9:23 PM

Valerie Harrison (bellini) said…
Good for you for learning these time honoured techniques!!
September 07, 2010 9:18 AM

Miss Martina said…
Thank you for the fabulous post! U make it seem quite simple. Would you please share your formula with ratios for fruit-sugar-pectin amounts & cook times to make fruit jam & perhaps which fruits require the lemon juice? That would be really great. Thank you for your time spent sharing. MM-
September 07, 2010 12:01 PM

The Little Foodie said…
I want to make jam but it still looks like so much work. If I had had excess mangoes again this summer I would.
September 08, 2010 2:43 AM

Jamie said…
How awesome that you learned to do this Patsy. I think canning is a lost art and I admire those that still do it. How long do the canned jars stay fresh? Thanks for sharing your experience. Maybe one day, I'll give it a try.
September 20, 2010 10:56 AM