While we were in Las Vegas last week, we treated ourselves to a couple of fantastic shows!  We saw The Blue Man Group, which My Husband has had on his list for years now... so, we HAD to see it.  If you haven't seen this show, find it... and see it!  It's a lot of fun and is even something we would consider taking Our Boys to see.  Nothing offensive in it and overall just a fun experience.

The other show we saw was Cirque du Soleil Mystere.  It was our first time seeing a Cirque du Soleil show and we were amazed by the acrobatics and the muscles in these performers!  While there were a few slow moments, it was overall a very entertaining and even funny show to see.

Sunday evening, we decided to try a restaurant in the Palazzo Hotel that we had seen a few advertisements on, Sushi Samba.  We had an assortment of dishes but, I will highlight our favorites.

We started with the edamame, which to be honest, was as basic as you can get.  Steamed and covered in sea salt.  Simple and delicious, but yet nothing too impressive.  The other appetizer we ordered was the Rock Shrimp Tempura.  It had just a bit of a kick to it, but was nice and crisp even though it was covered in a sauce.  I don't think there was even a tiny piece left of it. 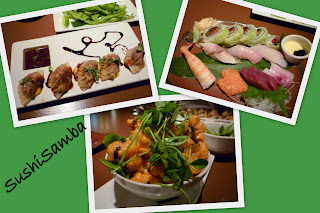 A third appetizer that we ordered was the Pork Gyoza, and it was definitely our favorite of the evening.  One of our friends just sent me the picture on my phone yesterday saying that he was still thinking about that dish... made me want more, too!  They were steamed and then lightly pan fried to get the crispness on the outside.  Cooked perfectly!

For our main dish, we gave ourselves over to another chef's selection with the raw sushi.  We had an assortment of fish that was all very good... and, to be  honest that was the most raw sushi I've ever eaten.  I enjoyed it, but I'm still a bigger fan of the veggie and Tempura style rolls.

I do have another restaurant to share with you, but next up will be a great no-cook summer lunch that I had today... so good, and GOOD FOR YOU, too!  Stay tuned!