This week has been beyond busy!  With both boys playing baseball, we've been lucky enough to have at least a couple of weeknights at home each week.  This week has not given us that luxury.  As I've said before, I really feel that eating dinner as a family each night is very important.

We've had either practice or a game every night this week.  I even found out tonight that My Youngest had a Cub Scout Den Meeting that wasn't on the calendar.  I live by my calendar and it seems that a recent email change didn't get on to everyone's group list so we missed the actual rescheduling of last week's meeting. So, we jumped in the van and ran over to the meeting.  There went the one night I thought My Youngest and I would get to have a laid back evening.

One thing we have managed to do is eat dinner at home each night whether it was super early or later when we got home.  This has meant later bedtimes for the boys as well.  I don't know about other people's kids, but ours need a certain amount of sleep in order to wake up somewhat happy in the morning.  So, let's just say that tonight when it was bedtime there weren't too many arguments because they were both too tired to bother.

So, earlier today I was searching for some recipes on-line for this weekend.  While I was searching, I received an email from the gym at my office which included a healthy recipe idea.  I knew I had all the ingredients on hand and could have it bake up while we finished working on homework and studying for tests.  We love fritattas, so the Quick Italian Spinach Pie sounded like it would go over well with my family because it looks a lot like a fritatta or a crustless quiche. 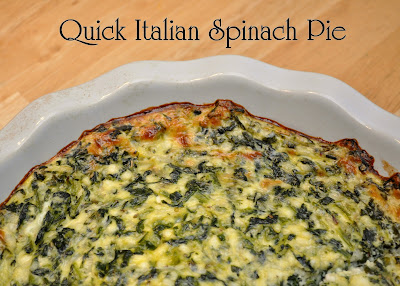 The title is very accurate as far as prep time.  My Oldest and I put this together in probably 5 minutes (I had already thawed and drained the spinach).  The only adjustments I made were to leave out the roasted red peppers as My Boys don't really like them and it would have taken a few minutes longer to chop them up.  They would definitely add a nice touch of red to the finished dish.

The verdict?  My Boys and I enjoyed it quite a lot!  My Husband is not a fan of these types of meals, so he foraged in the fridge and made a sandwich.  It took more than 40 minutes for the center to set up for me, so I would consider increasing the temperature slightly but, check frequently to make sure you don't overbake it either.

We have some leftover and I imagine that at least two of us will be reheating slices to eat for breakfast in the morning!  This would be a nice addition to a Mother's Day Brunch this weekend, too!

This recipe is actually from the Kraft Foods website and is an excellent source of protein (15 grams!) and only 150 calories per serving!  This would be a great way to "sneak" in just about any veggie.  I know My Youngest is more likely to eat certain one's if they are part of another dish and he doesn't really notice them.

You can find the full recipe HERE.

Whats Cookin Italian Style Cuisine said…
This one is calling my name, spinach pie is my favorite lunch or brunch...love the picture looks wonderful! I can eat this whole thing!
May 07, 2010 8:23 AM

Valerie Harrison (bellini) said…
I see from the recipe that this is also a "kught" recipe so I am hooked. There is something about spinach and cheese that I adore.
May 07, 2010 8:39 AM