Mocha-Chocolate Trifle to Bring in the New Year

I'm a bit late in posting this one, but better late than never! We were lucky enough to spend New Year's Eve at a neighbor's house. They invite several families over to bring in the new year. It's always a lot of fun, and they always ask that we only bring desserts.

Now, last year I brought a really pretty cheesecake. I mention this because last year, another neighbor also brought a cheesecake (a frozen one), and we laughed about bringing the same type of dessert. Wouldn't you know it... this year we both agreed NOT to bring cheesecake, and we STIL brought different versions of the same type of dessert - Trifles! We've already agreed to discuss what we are bringing next year so that we don't duplicate again! 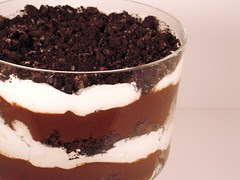 So, here's a picture of the Mocha-Chocolate Trifle (click HERE to get the full original recipe from Cooking Light) that I made for NYE. There were only a couple of spoon fulls left at the end of the night. I did make a couple of changes to the recipe that I found at Cooking Light. I didn't realize that we only had a drop or two of Kahlua left (mental note: have to get to the liquor store to restock!), so I left that part out. It really doesn't need it and with kids eating it I didn't feel it would be a big deal. Also, I haven't been able to find Hershey's Sweet Escapes in YEARS, and I think they quit making them, so I opted to use Oreos all crushed up instead. Those changes apparently went over well, because as I said it was nearly gone before we left to go home.

I love this recipe because it tastes decadent, but it is lower in calories so you can indulge without the guilt. Each one cup serving only has about 269 calories - and one cup is a pretty big serving. If you use Reduced-Fat Oreos you can keep the calories pretty close to the original recipe.

If you have a special event coming up and you've been asked to bring dessert, check out these recipes for inspiration:

Dragon's Kitchen made a Chocolate Banana Cake that would impress anyone you are serving it to... gorgeous!

My Kitchen Cafe made a Chocolate Caramel Cheesecake (originally from Smitten Kitchen) that looks like something that would go straight to my thighs, but oh it would be worth it!

As always Joy the Baker brings another stunning dessert, Glazed Lime Cake. If you haven't stopped by to read her blog, you are truly missing out.

Have a great day! Next up, I'll be sharing a soup that is quick, easy and perfect for those of us trying to eat healthier!

Patsy, this really does look decadent! I'm going to have to try this.

This looks really good. I have done something like this with brownies. Chocolate...always a good choice!

I bet you jaw-dropped when the similar dessert showed up.. that is hilarious but sounds like your NYE was a blast.. speaking of the famous "K", my parents just left Tokyo a few weeks ago and my father is a "Black Russian" type of guy.. anyway they were blown away at the prices here and I had to restock, and restock every other day..there was just a few drops in the glass and Dad was way beyond DONE... would you know he had me saran wrap the glass... I did not think the bottle was that bad in price but since we have no freeway here and I pay $20 in toll everyday to work... I think I've become immune.. hehe

I really don't know how you do it.. I have a puppy that is more demanding than me and i can barely crank out soup... You wonder woman you!!!

I love trifles... they always look so beautiful (but I never mind digging into one because of it!)

Pats,
It's good that used a cooking light recipe.
The one I posted from Christmas w/ the cherry/chocolate was the most fattening dessert on this planet.
Wow!

I have only recently introduced the hubs to trifle, and now anytime he sees anything layered, he thinks its trifle. Can't wait to show him this!

Your Mocha chocolate trifle looks divine! Thanks for the plug, my friend. :)

That looks so good! I like the sound of a chocolate trifle.

Trifles are so much fun to make! This looks great and I like the various textures involved.

Not sure I could eat only 1 cup! My mom always would make trifles for holidays - I think I may start my own tradition with your recipe!

That really looks delicious Patsy. I'd like to invite you to take some time to drop by at Foodista and share your delicious recipe with us. We have launched an online food and cooking encyclopedia ala wikipedia. Add a recipe and you can win a $100 gift card to Sur la table. Don't forget to register first so we know who to thank the recipe for. Thanks!

That looks delicious. Right up my alley!