Last week, I hosted our monthly Bunko game. As hostess, I had the privilege of coming up with a theme and asking each person to bring something to go along with it. Since I was coming off of a month of nibbling on treats and cookies, I thought I would “challenge” everyone to bring an appetizer or dessert that tastes great, but is in lower in calories. Luckily, everyone was up for the challenge!

I made two different things, as hostess I often like to do a little “extra” to ensure we have plenty of options. I found both recipes in The Complete Cooking Light cookbook. Yes, you are seeing a trend here lately; with my need to cut calories and eat healthier I have to refer to my trusted source: Cooking Light.

When I saw the recipe for Crisp and Spicy Breadsticks , I loved a couple of things about it. First, I loved that it looked easy enough that I could make it in a matter of minutes on a weeknight. Second, that it would be savory and have a bit of spice to it. When trying to cut calories, I have noticed that if something has a ton of flavor in it, then I can be satisfied more easily with a smaller amount. 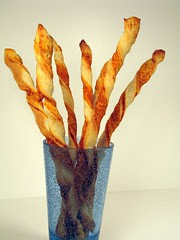 I used the Half-Sharp Paprika I picked up from Penzey’s last year. There is just so much more flavor in their version than the paprika I’ve purchased at the grocery store. Even after 6 months, the scent is still strong at the moment you open up the container. I followed the recipe and added the full amount of ground cayenne pepper. Most of the time, I will cut the amount as some people don’t like spice. I chose to add the full amount this time because I knew we would have enough things to nibble on that wouldn’t have any heat to them at all. This would be a nice contrast to those appy’s.

Of course, once I tasted one of these breadsticks I was struck by the heat in them. Just a tad hot for me, but everyone else loved them. I did end up serving with a small bowl of marinara sauce in order to offset the heat for anyone (me) who needed it. Also, it seems that there is nearly an exact recipe for these from Weight Watchers as well. You can't beat 68 calories for one breadstick and all that flavor! I'll be making these again.


I'll share the other recipe I made next time... it's something for your sweet tooth, but won't break the calorie bank! In the meantime, here are some other appetizer recipes that look like great nibbles.


Not only does Jaden of Steamy Kitchen take amazing photos and write such fun posts, she shares recipes that you just know you won't be able to resist like Trump's Cannellini Spread. I'm thinking this might be a great appy for Bunko next month.


Now, if I came across the Warm Pear Salad with Walnuts and Parmesan Cheese that was made over at Dragon's Kitchen... I'm thinking I wouldn't need to go further. Great flavor combinations and textures... it has it all!


Combine cheese, paprika and pepper in a small bowl; set aside.


Cut dough into 16 (8-inch long) strips. Gently pick up both ends of each strip; twist dough. Place twists 1/2 inch apart on a large baking sheet coated with cooking spray. Bake at 425 degrees for 8 minutes or until lightly browned. Remove from pan; cool on wire racks.

All the cool kids are making cheese sticks lately!

Girl Japan - yes, it was hard to stop at one... but even having a couple more, the calories aren't that bad!

Oh yum! I love heat, so these would be just fine for me. i have some smoked paprika from Penzey's on hand, however, which might be nice, too.

I love that you use so many Cooking Light recipes. I have 10 years worth of Cooking Light annual books.I just bought half sharp paprika from Penzey's. I haven't opened it yet, now I have an excuse!

Pats,
would you believe I have never heard of Bunko?
Can I eat it???