Originally posted in December 2008.  I decided to take a newer photo and repost with a slight edit to the recipe.  I remade these recently to share with friends, and as always, they were a huge hit and enjoyed by everyone.  They do reheat beautifully, especially if you have a toaster oven so that they can crisp up again without being over cooked.

I’m about to share a secret with you. It’s a recipe that my mother-in-law makes every year for Rosh Hashanah. It’s a once a year thing she makes. I fell in love with her Stuffed Chicken in Phyllo the first time I tried it. It looks very impressive when it’s served and the chicken is moist and cooked perfectly. This is something that is perfect for a holiday meal or for serving to guests in the fall or early spring months.

Now, I had to have her actually show me how she rolls the chicken and then wraps it in phyllo dough as I had never worked with it before. Many people are intimidated by phyllo dough because it can rip very easily. She makes a special trip to The Greek Store (yes, that really is the name!) to get fresh phyllo rather than the frozen kind you buy at the regular grocery. If you can get fresh, that is the easiest to work with because it has not had to be frozen and defrosted. If you don’t have a place that sells fresh, go ahead and work with the frozen dough, just buy a couple of extra boxes so that you will have plenty to work with when wrapping the chicken.

As for the stuffing, you could use your own homemade stuffing but we pick up a box of Stovetop to keep it simple. If you are making about 12-15 pieces one box should be more than enough for filling them adequately.

Edited to add a nicer photo than appeared originally on this post. 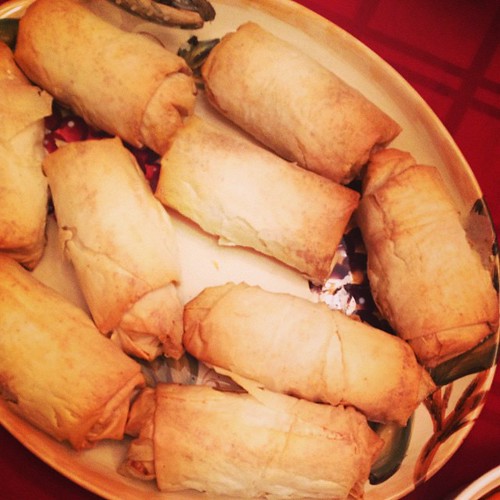 I served these last Saturday when we had some friends over for dinner and they were well-liked by everyone – in spite of them not being as browned as I would have liked. They were cooked perfectly! I will be sharing another recipe from that evening later this week.

Check out these recipes from around the food blogging world:
The Dinner Rolls Judy made at No Fear Entertaining would be a wonderful addition to this meal.
A quick dinner of Rigatoni with Sausage and Smoked Mozzarella from Elly Says Opa! Looks like true comfort food.

Happy Holidays and Happy Cooking! More to come from the dinner from last weekend so, check back in to see what else I made!

What's Cookin Chicago said…
*giggle* I feel so special because after reading your first line, I was already excited for the recipe! I have to try this considering it's a special recipe of your mom! Thanks so much for sharing your secret :)
December 23, 2008 9:21 PM

alexandra's kitchen said…
Oh my gosh, thank you for sharing this family recipe! They are so often the best ones. This chicken sounds delicious and festive. And FRESH phyllo! so cool. I'm not sure I can find that near me. I'd probably have to make a trip to LA, but it sounds as though it would be worth the trip.

Mary Bergfeld said…
Patsy, these look and sound delicious. You really hit this one out of the ballpark. Happy holidays.
December 24, 2008 12:51 PM

Patsyk said…
They are really wonderful, and I was thrilled to be given the recipe so I could make them for special occasions as well.
December 31, 2008 1:40 PM

Renee Paj said…
I pretty much love anything wrapped in filo or puff pastry. What a fun way to serve chicken!
October 14, 2014 10:28 AM