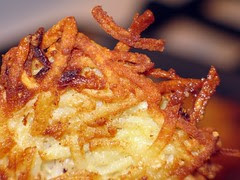 As this is the last night of Hanukkah, I thought I better share my Latkes! I only make them during Hanukkah, as they are special treat since they are fried in oil. I made them three times this year. My Boys absolutely love them - one likes them with sour cream and one with applesauce. Yes, they have different tastes.


I made them for our family gathering on Saturday night, which I will share more about on my next post. I prepared them a couple hours ahead of time, because they do take a bit of time to cook. Once I had them fried, I let them drain on a couple layers of paper towels. I kept them warm in the warming drawer of my stove (great feature if you don't happen to have a double oven, which I don't). They remained nice and crisp, and there were none left at the end of the meal - not even a crumb! I received many compliments on them, which of course, made me feel really great! 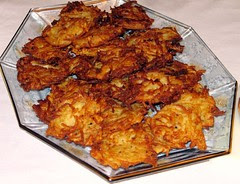 I made my final batch of them tonight since it seemed My Boys still had not had enough of them. I'll be honest, I do not shred them on a box grater as many people suggest. I use my food processor and have had really great results shredding them in this way. I just make sure to squeeze out a majority of the liquid before I begin mixing the ingredients together.


Latkes were made all over last week:

Ruth at Once Upon a Feast made Potato, Zucchini and Curried Sweet Potato Latkes.

Prudence Pennywise made her Latkes with carrots and green onions in them. Yum!

Over at Aggie's Kitchen, she not only shared her Sweet Potato Latkes, but also her Sweet Noodle Kugel!

Adapted from The Complete Passover Cookbook

Mmm - latkes are a must this time of year! Looks delicious and I think I'd have to side with your son who prefers sour cream on his! :)

Though I don't celebrate Hanukkah myself, I worked at a Jewish school for a few years and had the experience of celebrating all of the Jewish holidays. I'm quite enamored with all kinds of latkes and have made them a few times myself. Love them! Happy Hanukkah to you :)

Yum! Super delicious! Happy Hanukkah to you and your family!

This sounds really delicious and I know for one that my hubby will love this - anything fried is right up his alley. Have a happy new year.

Hope you had a nice Hanukkah! Your latkes look great! I made them for the first time this year and I couldn't get enough of them!

Thanks for linking to me!

These are really beautiful, Patsy. If you have one use a potato ricer to press liquid out of the potatoes.

These look fantastic! I managed not to make a single latka this Hanukkah, and instead at them at a friend's house and at a synagogue.

I prefer mine with just sourcream or with horseradish.

Pats,
Your latkes look as good as my grandmother's!!!!
and I love that you have your photo on your blog now! Now if I see you at Home Goods I can say hello!
Happy New Year!
Stacey Snacks

They look beautiful Patsy! I love your new picture too! Happy New Year to you and your family!

I didn't get a chance to make latkes this year - yours look perfect!

I just made some today and then stumbled across your post on tastespotting. I had to stop in since they looked just like a delicious, crispy snowflake.

Ooooh, I wish I had a big plate of those. Aren't they terribly addictive?