Family recipes are a true treasure, but the trick is often actually cooking with the person who made them since the written recipe has often changed over time. Those changes don’t always get written in, but are something that has been memorized. Also, there may be a technique that requires the familiarity of touch, as in making pie crust. One thing that I managed to do before my Grandma passed away was to have her show me how to make pie crust. Now, I don’t make pies often because even after she showed me how to do it, I never quite got the hang of making them look as pretty as she did. It’s hard to live up to the way she prepared her beautiful desserts.

My Oldest has a wonderfully adventurous spirit when it comes to trying new foods. So, when he asked if he could try Pumpkin Pie, how could I not try my hand at making it for him? Luckily for me (and him), My Husband recently gave me the Williams-Sonoma Essentials of Baking: Recipes and Techniques for Succcessful Home Baking (Williams Sonoma Essentials)

. In it was a recipe for Classic Pumpkin Pie that I actually had all the ingredients for, as well as tips on rolling out pie crust and pre-baking it.

I set to work preparing My Grandma’s Pie Crust recipe. Now for the life of me, I have no idea how she got 2 crusts out of this recipe. I barely got one, and I rolled out thin enough. I had just enough additional scraps of crust to use these cool pie crust stamps to make the edges look nice. (Thanks to My Husband! Yes, I know I am spoiled!) You see, I have never been able to get my fingers and thumbs to work properly when it comes to doing the crimped edges. I guess you could say I am very challenged in that area. If you are like me, then pick up the pie crust stamps and that will solve your problem! 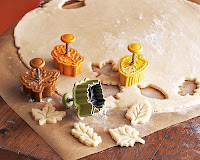 Photo of pie stamps courtesy of Williams-Sonoma.
The crust baked up beautifully and I allowed it to fully cool before beginning the pumpkin pie filling. All of the ingredients are typical of what is part of this custard-like pie. My Oldest wanted to help make the filling so, he brought over his chair to the counter and set to helping me put in the ingredients. As I poured the mixture into the crust, I could smell the combination of spices: freshly ground nutmeg, ginger and cinnamon. It didn’t take long for those scents to move beyond my oven as they baked. The pie took the full amount of time to bake, 55 minutes.

So, what did My Oldest think? His response was that he wasn’t crazy about it, but “Thank you for letting me try it, Mommy.” (Yes, I am proud of his manners!) I thought the pie was “ok”, nothing special, but keep in mind that I’m not a huge pie eater to begin with so if you love Pumpkin Pie do give this one a try and let me know if it deserves high praise or not.
Here are some other holiday dessert ideas:
Sandy at Eat Real made Cinnamon Rolls that would be perfect for breakfast on Thanksgiving morning.
Lindsay at Love and Olive Oil made Pumpkin Muffins with Cinnamon Rum Buttercream frosting that will be sure to please your youngest guests on Thanksgiving. Ok, so the rum in the frosting is more for the adults... just make a few with a cream cheese frosting and give those to the kids instead!
And, if pie crust still isn't your thing, check out the Apple-Cranberry Pie with Oatmeal Cookie Crust that Recipegirl made! This one will be sure to steal the show when dessert rolls around on Thanksgiving.

Mix flour and salt, cut in shortening with a pastry blender. Add water, mixing until moist and the dough starts to come together. Divide dough in half (I couldn't get a whole 9-inch crust when I divided in half, so I used all of the dough).

Directions
Prepare 1 recipe for pie crust, roll out and place in pie dish. Crimp edges or use decorative dough stamps.
Preheat oven to 350 degrees and make sure rack is placed in the middle.
In a large bowl, combine the pumpkin through evaporated milk. Whisk until it becomes smooth. Slowly whisk in the melted butter through salt. Continue to whisk until the mixture is very smooth and well-blended. Pour the filling into the prepared pie crust.
Bake until the filling is set, about 50-55 minutes. The center should jiggle slightly. Transfer to a wire rack to cool. Serve at room temperature or chilled.

Stacey Snacks said…
Patsy,
That pie is beautiful, the crust and little stamped leaves around the edges make it special.
November 12, 2008 9:34 PM

Heather said…
how adorable! the shapes on the crust are perfect!! sounds delicious, and like such a wonderful family tradition!!
November 12, 2008 11:39 PM

Mary Bergfeld said…
Great idea to use pastry cutouts around the rim of the pie. Your pie is beautiful.
November 13, 2008 8:18 AM

Veronica said…
What a beautiful looking pie! I've never been good with pie crusts...I will have to look for those pie stamps.
November 13, 2008 9:06 AM

Finla said…
I have never made anything elsa with pumpkin than soup and this pie looks really delicious and beautiful
November 13, 2008 10:53 AM

Melanie said…
I'm making pumpkin pie on Sunday but am nervous about the crust because mine never looks pretty. Yours on the other hand is gorgeous - I've never thought of putting stamped out pie shapes on the edges. Brilliant!
November 13, 2008 5:28 PM