Kid’s in the Kitchen – Burritos

My Husband is in the midst of a project at work and they are nearing the deadline. What this means to me is that he’s working a bit later for now and missing dinner with us. When I found out last night that he wouldn’t be leaving work until after dinnertime, I decided it was time to pull out a cookbook I borrowed from the library, Kosher by Design Kids in the Kitchen

. My thinking was that the boys and I would pick something simple to make and they could help make dinner. That usually makes for some happy campers at my house.

Let me take a moment to tell you about this cookbook. We do not keep kosher at our house, but if you do this book shares some basic instructions on keeping kosher. It would be a nice way to explain the rules to your kids. Each recipe is accompanied by a picture, which helps even the youngest child who can’t read to choose something to make. The ingredients are things you probably already have on and, and if you don’t they are easy to find at a regular grocery store. I also found the instructions simple to follow and that they allow for the kids to jump in and do the cooking.

We’ve made two things from the cookbook so far. When we made the 30-Second S’mores, they didn’t last long enough to get a picture of them. They are ridiculously easy and I will be making them again as a treat soon, I am sure.

When it came time to figure out something for dinner last night, I went through the main dishes in the cookbook and realized I had everything on hand to make the Rice, Bean and Cheese Burritos. I did sub traditional white rice since I don’t have any of the quick-cooking rice on hand. I prepared that while the kids continued to play and do their thing. It didn’t make sense in having them sit and watch rice cook.

So, while the rice was cooking I was assembling the ingredients needed and putting them into bowls so that we could just scoop out what we needed. One thing about this recipe that I think can be considered either unnecessary or reduced was the fajita seasoning boiled with water. I used a taco seasoning packet since that’s what I had on hand and I knew I could get away with the kids eating it, but the ratio of 1 cup of the seasoning mixture with 1 cup of rice turned out VERY watery. Next time, I think I may just mix in some mild salsa with the rice instead. That would make the recipe even simpler for the young men in my house. Of course, if I had used the instant rice and allowed it to do it's thing for 5 minutes in the pot it would have been just fine.

Here is My Youngest ready to get to work: 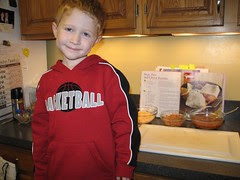 After I showed him what needed to be put into each tortilla, he wanted to do them all by himself. 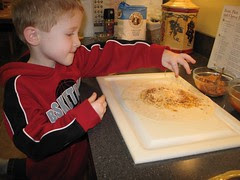 I did the rolling since that can be tricky if you don’t close them up properly. The recipe suggested wrapping each burrito in aluminum foil separately. That seemed like another unnecessary step. I opted to put all 4 into a baking dish (is that dish cute? I found it at Home Goods the other day) and cover the whole thing with foil. That really worked out just fine. 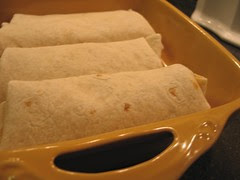 Once they came out of the oven, I cut them into 2 pieces for easier eating with smaller hands. We had some tortilla chips with sour cream and salsa and called it dinner! 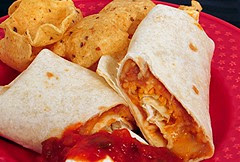 This time, My Oldest opted out of helping because he was too busy reading up on doing magic tricks to perform for us after dinner. But, he’s selected another recipe from the book that we’ll be making this weekend. So far, I am enjoying this cookbook and am adding it to my Wish List of books to add to my growing collection.

Overall these burritos were delicious and the kids enjoyed every last bite! When I asked My Youngest what he thought, he said they were good "because they were made with a lot of his love in them". Can't beat that!

Rice, Bean and Cheese BurritosSource: Kosher by Design – Kid’s in the Kitchen

Preheat oven to 400 degrees.
Place the water and fajita seasoning spice into a medium pot. Over medium heat, bring the water to a boil.
Stir in the rice. Let rice stand for 5 minutes. Fluff with a fork. Set aside.
Lay the 4 tortillas on a work surface. Scoop 1/4 cup of the cooked rice into the center of each tortilla. Add 1/2 cup of the shredded cheese onto the rice.
Spoon 2 tablespoons of the refried beans onto the rice and cheese.
Roll in the sides of 1 tortilla and then roll it up making sure to tuck in the sides to seal it up. Repeat with remaining tortillas.
Wrap each burrito in aluminum foil. Place the wrapped burritos into the oven and bake for 15 minutes to melt cheese and warm through.
Serve with sour cream and salsa.

Kudos to the kids. You did a great job rolling them.

What a good and fun mom you are! I bet your boys love that you let them help. The burritos look like a great meal for me to reserve for the same situation when my husband is stuck at work.

Next time my niece and nephew come to visit we're making burritos!

Looks like a fun night! The burritos look pretty good too.

That is such a great way to involve the kiddos in cooking! Looks like your little guy was having a blast! Gotta start them young! :)

What a sweetie pie! You've got a Tyler Florence in the making. Great recipe.

Sounds like the kids had fun - your boy certainly looks as if he enjoyed himself!

It's so much fun to get the kids in the kitchen! Great post and mmmmmm on your burritos!

Your sous chef is adorable!

When my kids were really young, they always were very adventurous in their eating habits when they helped make dinner. You now have a budding chef in the family!!