If you've read Rachael Ray's magazine, Everyday with Rachael Ray, then you know about the feature each month called the No Recipe Zone. I haven't made anything from it, but after making dinner tonight I decided that it qualified for the No Recipe Zone. I was trying to be creative because my meal plan for the week was not appealing to me. What I found in my fridge and pantry were these ingredients:

I knew what flavors I wanted to use, but didn't want to go searching for an actual recipe. And, while I was cooking I was "flying by the seat of my pants" so to speak. I didn't measure anything, and I must say this was a delicious meal! I pulled out 2 chicken breasts and defrosted them most of the way. Note: they were not included in the picture, because let's face it, raw chicken is not exactly the most appetizing thing to look at! I sliced them into super thin pieces because I wanted them to cook up quickly. Then, I tossed them with a handful of herbs de provence before adding them to a hot skillet with extra virgin olive oil. Once the chicken was done, I added a "glug" of white wine (yes, that is a techinical term, just ask Rachael!) and let that cook down for about 2 minutes or so. Then went in a splash of lemon juice and about 1/2 cup of chicken stock. And for fun, I added some capers before letting the whole thing come to a boil. After a quick taste, I thought it needed "something". Back into the fridge I went, where I found an opened container of half and half... so, in went about 2 tablespoons and then a quick stir to mix it in. I let it simmer while the pasta finished cooking.

The flavor of the sauce was really smooth and the lemon was fairly assertive even though I only juiced about a half of a lemon. The half and half created the smooth texture I was looking for and the herbs added just the right amount of flavor to the chicken so that My Boys would eat it. It was a light tasting meal, but really tasty.

I love when meals come together so nicely like that! So, there you have it - no real recipe but more of a guide as to what I did. I was quite pleased with how it all turned out, since I've had more than my fair share of complete duds when I've done this in the past.

I'm submitting this to Presto Pasta Nights hosted by Melissa the Cooking Diva this week.

Pasta is a favorite "go to" dinner idea for me on weeknights. If it is for you, then check out these recipes for some new ideas:

Smell & Taste are My Memory made Fettuccine with Pesto, Pancetta and Mushrooms that will make your mouth water.

Mary at One Perfect Bite hasn't been blogging long, but she has some fantastic recipes to share like her Fusilli with Fennel, Sausage and Wine.

Kevin at Closet Cooking brought back more than memories from his trip to Greece. He made Pastitsio so he can enjoy the tastes of Greece at home!

Prudy said…
It's so pretty around here! So much to look at and love. I even love your little signature at the bottom. And that pasta! You brilliant woman-I wish you could peek in my fridge and pep up my plans!
October 30, 2008 1:21 AM

Jo said…
I try and catch Rachel Ray on weekends when I have the time. Recipes such as this are great when you're in a hurry and they taste equally great.
October 30, 2008 8:57 AM

Mary Bergfeld said…
Patsy, I love your new look. Thanks so much for the shout-out. Greatly appreciated. The lasagna looks delicious. It's hard to go wrong with an Ina recipe.
October 30, 2008 11:47 AM

Stacey Snacks said…
don't you love that Swanson Natural Goodness broth? It is close to homemade, just not as rich, and I like that there is no MSG, like College Inn broth.
October 30, 2008 12:22 PM

Lacey said…
looks good. the best recipes happen when you dont measure and you use the stuff you normally find in the pantry.
October 30, 2008 6:47 PM

Carla said…
At least you remember what you put in. Usually when I make a recipe up on the spot, I forget to take note of measurements. Great job!
October 30, 2008 7:54 PM

Leslie - thanks! I am trying to get more creative and not use recipes 100% of the time. It's so nice when it turns out so well!

Girl Japan - it really had a nice light flavor - exactly what I was looking for that night.

Prudy - you are so sweet! I can imagine I'd have so much more to work with if I peeked in your fridge!

Jo - I haven't caught her show in awhile, but I will stop and watch it when I can. Quick meals like this are a savior for me on weeknights.

Meg - thanks, and your welcome! Enjoy!

Mary - happy to share a link to great recipes whenever I find them!

Stacey - you are so right! I always have Swanson's on hand, I just love the flavor it has.

Carla - I'm working on keeping track of what I put into dishes like this... I hate when I can't make them again because my memory stinks!

Deborah said…
what a great meal! I'm not usually good and throwing things together, but every once in awhile,things work out for me!
October 31, 2008 11:34 AM 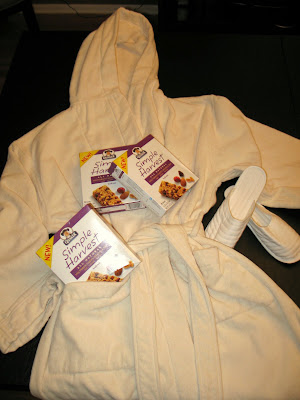