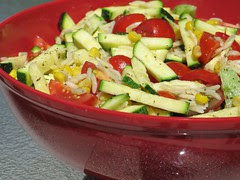 We went crabbing again this past weekend, so I'll be sharing a bit from that in the next day or two.
Written by Patsyk

Your salad looks so fresh and delicious! I'm glad you had great time at your block party.

A block party sounds like fun - never heard of it before actually! The salad looks very colourful and fresh - yum

What a fabulous looking salad! I bet your block party ate it in no time!

Crab fishing, wow, do tell! My boys would love to go do something like this!

Block parties are so much fun! What a great colorful salad to bring.

Every night is a block party in our neighborhood -- we're pretty lucky that way I guess!

Dragon - thanks, it was so nice to be able to use fresh produce direct from the farmer's!

Leah - you ARE lucky! It's funny, but since the block party last Sunday it seems like the whole neighborhood has been out after dinner each night this week. It's been a great way to spend the evenings.

Lucky you... I absolutely love block parties. We do community happy hour parties once a month on Friday afternoons at our community park. The kiddos play and run wild while the adults share good food and wine!

recipegirl- sounds like you have a lot of fun in your neighborhood every month! I love the idea and may have to suggest something similar to my neighbors... we are outside nearly every night as it is!

This is gorgeous. I am just starting to cook with orzo.

I was surprised to learn that zucchini could be eaten raw.