I have a couple of Rachael Ray's cookbooks and have found a few favorite recipes from each of them. I don't go to them often, but every once in awhile there's something that just sounds like it will hit the spot. When her new cookbook, Yum-o! The Family Cookbook

, I decided it was worth checking out from the library. As a side note, I discovered a couple of years back that libaries keep a WHOLE section of cookbooks! This discovery has saved me (read: My Husband) quite a lot of money as I have tried a few recipes from a ton of cookbooks only to find I didn't really NEED to own them. Some I enjoyed so much I went out and purchased them. It's a great way to do a "test run" with a new cookbook.

So, this new cookbook of Rachael's is geared to kid-friendly food and getting them into the kitchen with you. It's also supposed to be somewhat healthy, I say that because there are some recipes that I didn't feel were all that healthy - a bit too much sugar or oil here and there. At any rate, there are some cute lunchbox ideas in it and a few main dish meals that I thought might go over well with my family.

For our first try at this cookbook, I decided to make the Paprika Pork Chops with Swiss Chard Egg Noodles. Swiss Chard is something I've never tasted before, so it was definitely a new one for us. It looks quite a lot like fresh spinach, but it's flavor is SIGNIFICANTLY different. I cooked it according to the instructions, but if it's supposed to taste bitter - let's just say we won't be having that again. We tried it, so at least we can say we gave it a shot before knocking a perfectly good vegetable off of our shopping list.

Since this was a new veggie for us, I am sharing this with Toontz at Okara Mountain who hosts the monthly blogging event Triple Dog Dare. This month the dare is to cook with a vegetable you've never cooked with before... I think this fits since it's a first for cooking with it AND with eating it! Even though we didn't care for it, I imagine others do - just like broccoli rabe... not a big fan of that one either. Guess I'm not a fan of bitter vegetables.

The second part of the recipe was the Paprika Pork Chops. For the paprika, I dug into my stash of Penzey's spices and used the Half Sharp Hungarian Paprika. I love the smokiness of this paprika, so much more interesting and flavorful than the McCormick paprika at the grocery store. This was a quick and easy way to prepare pork chops, just enough oil in this recipe to create a nice crisp crust on them. Everyone enjoyed them, and My Oldest said I should make them alot since he had 3 servings (keep in mind that he's 6 and 3 servings equates to one whole 4 ounce pork chop!).

At this point, I don't think I need to own this particular cookbook as there are maybe 2-3 recipes that sound like something we'd enjoy. So, now I have to go back to the library and see what else I can pick and take for a "test drive"! 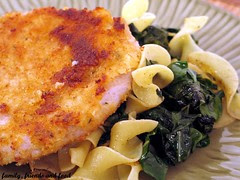 Directions
Place a large pot of water on to boil the egg noodles.

Place the chops between wax paper or plastic wrap and pound out no more tha 1/4-inch thick. season the pork cutlets with salt and pepper (I forgot to do this!). Combine the flour and paprika on a plate. Beat the eggs in a shallow dish. Place the bread crumbs on a second plate. coat the chops in flour, shake off the excess, then coat them in egg and bread crumbs.

Heat about 3 tablespoons of the oil in a large skillet over medium-high heat. When hot, add the cutlets and cook until golden - about 4 minutes on each side.

Heat the remaining 1 tablespoon oil and the butter in a deep skillet over medium heat. When the butter melts into the oil, add the chard and cook for 6-7 minutes. Drop the egg noodles into the pot of boiling water after a minute or two. When the noodles are al dente, drain and add to the chard, toos and season wit salt, pepper and nutmeg to taste.

If you this recipe sounds like something your family might enjoy, you might want to check these out:
Homemade Crispy Chicken Strips at Sweetnicks
Orecchiette with Broccoli, Bacon & Lemon @ Enlightened CookingChicken and Spinach Quesadillas @ Annie's Eats
Written by Patsyk

I've always been leary of Swiss chard too...I don't think it'd really go over all that well here either. The pork cutlets and egg noodles would though!

Thanks for the rec' on the cookbook, great tip about the library too. That's a great way to test drive a cookbook before buying!

That pork chop looks great but the swiss chard, well, not for this family!
I just got a library card and found I like going to the library. So much cheaper to "test drive" a cookbook!

I love Rachel's magazine, but I've never tried anything out of her books. This sounds like a great pork chop recipe, though!

Wasn't I JUST saying we had the same taste in cookbooks? And then you have to go raving about Rachel Ray? I don't know if we can be friends anymore.

Looks like a fantastic recipe to me. I have to really love a cookbook to buy it these days since they are taking up so much space in my house!

i was thinking of paprika last night..and now i see this delicious paprika pork recipe 'im wondering what am i waiting for to do this delicious dish! yum! i love rachel ray i will definitely enjoy this recipe..thanks

Yep, Swiss chard is not for us... we just don't like anything quite so bitter. Marking that off the list FOREVER!

Do use the library to test out those new cookbooks... and even some older one's, I've found some fantastic new recipes that way.

That Girl - Your comment made me laugh... I do hope we can still be friends in spite of the RR cookbook review!

Deborah - I quite subscribing to her magazine since I wasnt' making anything from it, but the couple of cookbooks I have from her do have some quick and easy recipes that we like.

Jenny - I hear you on the space... my cookbooks are going to take over our bookcase before I know it!

Dhanggit - do try the pork chops, the were a huge hit for us! So, I'm sure they'll make a repeat appearance at dinner.

Hmmm. I've been cooking with Swiss Chard for over a month now since first discovering it, and I haven't found it to be bitter at all. However, I cook it longer than what Rachel says, more like 10 minutes- covered, and maybe that removes the bitterness. Then again, mine is fresh from the garden, so maybe as it sits at the market it develops tannins?

Sorry it didn't turn out for you, otherwise the recipe sounded good- and you've definitely intrigued me enough to check out this book.

Erika - maybe its one of those things that tastes different to some people - like cilantro. No one in my house can eat it because we think it tastes like dish soap!

The pork chop recipe is very tasty, so it wasn't a total loss!