Well, my second challenge was exactly that - a challenge. After reading and re-reading the recipe every day for 2 weeks I was sure I was ready for it. Of course, I got off schedule when I began the recipe on a Friday night, and didn't get to assemble it until Tuesday! Yikes! Yep, life got in the way of me really completing this challenge as it should have been done. Too many distractions and just rushing through parts... next time I hope to begin earlier and really go step-by-step. Guess you can say my lesson has been learned! My baking has always been very simple recipes that do not have a lot of steps involved, so when I saw this month's Daring Baker's challenge I had to work up some courage to begin working on it.

Anyway, the Opera Cake is a really pretty cake (and you can see some really fantastic examples by visiting the Daring Baker's Blogroll). There are layers of jaconde, syrup, buttercream, mousse and a white chocolate glaze. Let me begin by telling you how my attempt at making this cake went... 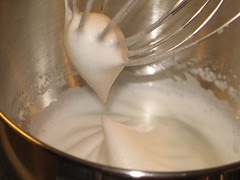 On a Friday evening, My Husband had a movie to watch that I really wasn't interested in and my boys were in their playroom doing whatever boys do when mom isn't watching. So, I set to work, with no one around to interrupt. The jaconde was simple to make, and I was thrilled that I had the whisk attachment on my Kitchenaid, as it made the job of whipping egg whites simpler than simple. You can imagine my excitement that I was able to accomplish that part of the task with such ease. I cut the recipe in half since I knew we couldn't eat the entire cake by any stretch of the imagination, and we'd be leaving soon for vacation. Fortunately, the measurements halved relatively easily. 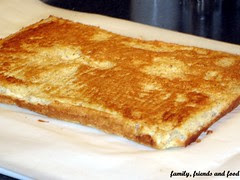 Once I got the jaconde into the oven, I set to making the mousse. Or so I thought I was making the mousse... talk about not looking at the recipe the right way! I had both the recipe for the mousse and the syrup printed on the same page, and it seems that I got the ingredients for both a bit mixed up! Yep, mistake number one! I had to start over on the syrup, which I was flavoring with limencello (my good friend, Anya, was nice enough to share some she had from Italy). It had a nice scent as I brought it just to a boil before removing it to cool. Off it went into a container so it could wait in the fridge until I was ready to assemble.

Next, I made my second attempt at the mousse. This time I closely followed the directions. I decided that with the almond meal in the jaconde that with the mousse layer I would flavor with amaretto. I took a quick taste once it was completed and was really happy with the way it turned out.

Now, we were given a buttercream recipe to use, which required cooking part of it before mixing. We did have the option of using another buttercream recipe as long as we kept the flavors light. I opted for a simpler buttercream that did not require cooking and flavored it with almond extract. Can I just say, this icing was hard to keep in the house as it kept calling to me - it was so good. I'll be keeping that recipe to the side next time I need to ice something for grown-ups... as I doubt my little men would appreciate the flavor - they are vanilla lovers.

So, after working in the kitchen the entire evening, I had nearly all the elements prepared. I felt like it was all going together rather well. I had planned on assembling the cake on Saturday... well, that did not happen due to a number of other things that became a higher priority that day. Then, Sunday we had family come to visit for the afternoon then, before I knew it Monday arrived. Ughhhh, by the time Monday rolled around, I had to start getting us packed for our trip to Arizona! So, on Tuesday, I assembled the cake (using my ever-so-sharp memory - NOT!), and as I am going along I realize I completely forgot the syrup! Oh no! I had not iced the top layer yet, so I drizzed it on top. As I was going along, I also was clearing out the fridge and was tossing anything that was not needed into the garbage. Can you guess what leftover ingredient I managed to toss before realizing I needed more? The buttercream! I needed one more layer of it on top. At this point, I am stressed and just needed to take a break from the whole fiasco. So, I wrapped it and put it in the fridge. 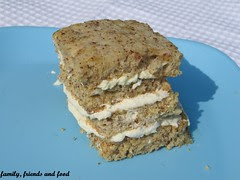 I never got the glaze done as I didn't want to make another batch of buttercream that would end up tossed. So, my cake is definitely lacking when it comes to it's appearance. I do promise to do better on the next challenge as I have certainly learned a few lessons from this one.

I'm happy I did attempt the recipe even if it did not go as well as I had hoped. Here's to next month!
Written by Patsyk

I hear you on life getting in the way! I thought the posting date was the end of the month. Imagine my surprise late Monday night!

Great job on your cake. At least you finished it!

The best thing I have found about DB's is that everyone has there ups and downs This was a hard cake for me. I copied and pasted the recipe into my work program and then edit the text to highlight the things I knew I would not remember. I still messed up but in the end it is the journey and not necessarily the destination that important. NEXT Month will be better I hope!

Thanks for stopping by.

You got further than I did! I just couldn't get around to it this month. Oh well...

I like the sound of the limoncello and amaretto flavour combination. I had trouble finding time to do this one as well. I had planned on doing it on a weekend but time slipped away and I ended up doing spread over two weeknights and it was a bit rushed. You are right, buttercream is dangerously good! :)

In the end it's all about the effort, learning, and fun, so I'd say you had a big success.

You poor thing! I'm sure your cake tasted great despite the mix-ups. I have certainly had my share of experiences like yours. I honestly don't know how I got mine done except that I was a total b*tch to my family and told them to stay the hell out of my way! ;)

This was such a daring challenge! I like the sound of limoncello and amaretto.
Shari@Whisk: a food blog

Excellent effort and at least you got the idea and a taste.

That is a great idea about printing the different steps on different papers. It does get confusing when the recipe is so long! Great job, even though you weren't able to complete it like you wanted to!!

I'm always checking and re-checking the recipe too. Limoncello and amaretto would be nice together!
Shari@Whisk: a food blog

Sorry your cake didn't turn out like you wanted but I'm sure it tasted wonderful.

Hope June's challenge is better for ya.

Oh, thank God someone else had as many issues as I did! Bless you.

Oh, doesn't that happen to all of us!!! Im sure it still tasted good.