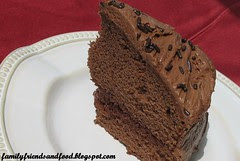 Last night we got together with another family for dinner. To keep things simple, we just did a taco night which everyone enjoyed. Sorry, no pictures as they were eaten soon as they were ready!

When we were at the grocery store picking up a few things to go with dinner, My Husband decided that he really wanted a chocolate cake. And, being the wonderful wife that I am, I said sure we can do that. Now, I'll admit that I don't have a favorite chocolate cake recipe so we picked up a box of cake mix. I know... sharing with friends I should have made a cake from scratch. One thing I don't like to do is go in search of a dessert recipe after I've made it home from the store... which means I may not have all the ingredients. Soon as we got home, I got the cake baking. I should also mention that I've never made a 2 layer cake before. I have the pans, but for some reason I've never made a layered cake. Of course, I needed to change that so the batter went into 2 round cake pans. They baked up just as the should (remember it's a mix - how hard can that be, right?), they did dome a bit in the middle though.
I could have gone the easy route with the frosting as well, but where would the fun be in that? I ADORE frosting (who doesn't?). I used a VERY basic chocolate buttercream recipe that is on the Domino powdered sugar package. Super easy to make, that you really don't need to bother with the pre-made frosting. My boys enjoyed licking the little bit of frosting left in the mixing bowl.
My Youngest wanted to help with frosting the cake, but I told him I had a special decorating job for him once I had that part done. As I mentioned before, the cakes domed in the middle so I had to slice off that part of the bottom layer so that I could frost it and the top layer would sit properly. Once I had it frosted, I let My Youngest put chocolate sprinkles over the top. I think for my first attempt and a layered cake I did a pretty nice job. 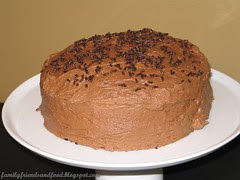 Email ThisBlogThis!Share to TwitterShare to FacebookShare to Pinterest
Labels: Dessert

That looks gorgeous, I could just eat a piece right now.

Have you ever used carob in place of chocolate?
I know many people avoid carob, but I find that the trick is to find the right brand and

then you'll really see that carob can be (almost) as good as chocolate.

The brand I use is from Holy Food Imports,
which comes from Israel, so it does have an excellent and unique taste.