A simple yet, delicious dinner during the week of Passover may seem daunting to anyone who has not tried to stay Kosher during the holiday. One way to think of this week is to look at it as a challenge to see what you can cook that is not terribly processed and add additional vegetables to your diet. You could even say it's a week of pasta detox, if you want. I know I tend to serve pasta with most of our dinners. It's quick and easy, so it does tend to become a habit to just throw on a pot of water to boil while preparing the rest of the meal. Going a week without pasta is a good idea once in awhile.


One thing we do to replace pasta during Passover is we eat more root vegetables, such as potatoes. I like to try different ways of preparing them so we don't get bored of the same old recipe. I like to do a simple Rosemary Roasted Potato recipe. It's simple to prepare and you don't really have to think too much about it while it bakes. You can move on to the other parts of the meal.

To go with the potatoes, I made a Lemon Matzo Chicken. This is a variation on the usual bread crumb mixture, by substituting Matzo meal. Rather than pound the chicken flat, I like to slice it thin. I find that it is easier to get them as thin as we prefer by doing that, rather than pounding them. But, if you have had a bad day and need to get out some aggression, by all means pound away! I do a simple pan-fry of the chicken and then I make an even simpler lemon-wine sauce using the drippings that remain in the pan.

Add a nice tossed salad with a oil and vinegar dressing and you have a fantastic dinner ready with minimal effort. I won't lie and tell you it's done in 30 minutes, as the potatoes do take time. But, if you get them started right away, you can actually take your time with the rest of the meal and enjoy a glass of wine and relax while you cook and wind down for the day. 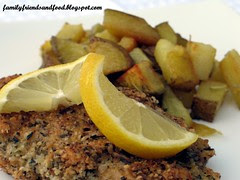 Patsy,
I always enjoy seeing what you are cooking! I just sent you an award on my latest blog post. You are great!

So on all other nights our dinners usually consist of grilled or roasted meat/fowl and veggies. Yet, for some reason, it seems like the most difficult thing to create Passover dinners. I think its just the mental block that I can't have rice or pasta that gets to me, since in reality, we don't eat much of either.

Jenny - you truly are a sweetheart! I was quite flattered with your award.

kate - I do tend to serve a lot of pasta, but I am able to serve meals without it when I don't have the pressure of Passover... so, what is it about Passover that makes it so much harder to figure out?