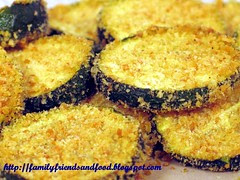 It's amazing how adding a few simple things to an ordinary vegetable creates a new and interesting dish. Once again, I went to Ellie Krieger's new cookbook, The Food You Crave, to try another new veggie side dish. Zucchini is a vegetable that I don't remember seeing much growing up, other than as the candied zucchini my Grandma used to make which, is a beautiful addition to the holiday table and so good it's hard to stop eating it. Now back to the dish I made, Zucchini Parmesan Crisps.

The combination of crunchy bread crumbs and freshly grated Parmesan cheese as the coating for the zucchini chips really appealled to me. I am continually trying to introduce as many different types of vegetables and ways of preparing them to my boys as a way of finding new favorites for our family.

The zucchini is cut into 1/4-inch slices, then tossed with EVOO before dipping it in the bread crumb mixture. The process goes quickly for a weeknight meal. My oven has been behaving badly lately, so I attribute the fact that the zucchini chips did not crisp up as much as I would have liked to the varying temperatures that my crazy oven chooses to give me lately. I will make this again, but I may have to try a different cheese for flavoring as my two boys didn't care for them and I tend to believe that the Parmesan cheese is to blame due to it's stronger flavor. I do believe that you could leave the cheese out all together if you want to and if you do, perhaps adding in some dried Italian herbs in it's place to punch up the flavor a bit. Another change would be the type of oil to something infused with garlic or chili-pepper to really kick it up and create another flavor profile all together. This recipe really does lend itself to many variations limited only by what you may have in the pantry on a given day.

They were delicious and the bread crumb mixture gave it the crunchy texture I wanted even though the zucchini itself was not crisp. So far, I would have to say, that this cookbook is delivering on it's title, The Food You Crave. Each recipe I have chosen has included fresh, quality ingredients and has been satisfying on it's own. I'll continue to share what I make from this book and how each dish turns out. I just love a new cookbook that can be used so easily!
Written by Patsyk

Email ThisBlogThis!Share to TwitterShare to FacebookShare to Pinterest
Labels: Side Dish, Vegetarian

Those look so good. Nice oven roasted zucchini with a crispy and cheesy crust...mmm... bookmarked

The non-cheese option would work for those who don't care for cheese.

Kevin - the crunch from the crust is really what makes this dish!

Bruce - I was thinking of my friend, M, when I mentioned that you could skip the cheese. If you ever want to try the "cheesey" version, feel free to come on over!

I just bought some Panko breadcrumbs that I wanted to try. This sounds perfect!

Those look so good!

I grew up on zuchini dipped in batter and fried in a pan....this looks way healthier and very yummy. My husband likes zuchini but only when it doesn't get soggy. I will definately try this one. I haven't been impressed w/her desserts so far but I have made her turkey meatloaf and it was tasy.

I think Panko bread crumbs would work really well in this dish... I may have to try it next time as well, since you just reminded me I have some in the pantry!

I have a hard time purchasing zucchini at this time of year, when I have so many in the fall! I'll bookmark this recipe and come back to it when I have an abundance! They sound good.

Zucchini is one of my favorite vegetables. This looks like a really tasty way to serve them!

i've tried something very similar and i love it! but i make it not so healthy by dipping them in ranch :)