Pasta with Spinach & Pancetta – clean out the fridge night!

When I get to the end of the week and I see that I have managed to cook through nearly all of the fresh produce that I bought early in the week, I feel like I planned really well. This means I am ending up using more of what I bought and not throwing out as much. Sometimes when I go to the market and the produce looks so good, I pick up things thinking I’ll figure out something to do with them. Unfortunately, this doesn’t always happen, which results in wasted food (and money). So, I am trying really hard to stick to my list when I go shopping since I know those are things I need for the meals I have planned.

So, after looking through what was left in my refrigerator today, I found some pancetta and baby spinach. With these goodies in mind, I started thinking about what to do with them. Since my Husband was heading out to play poker tonight, I could plan to eat whatever I wanted for dinner. So, based on other dishes I have had, I came up with a dish that had pancetta and sautéed spinach with garlic tossed with cavatappi pasta. I would say that you need to toss it with the pasta to offset the saltiness of the pancetta. I did tray grating some nutmeg into the dish as it cooked, but didn't really notice the flavor. I had seen that done on a couple of cooking shows and the idea was that this spice would bring out something extra in the spinach, I didn't notice it and that was likely due to the pancetta being the primary flavor that was happening there. Don’t you love when something great comes from what you already have on hand? 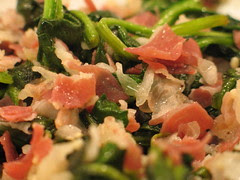 Email ThisBlogThis!Share to TwitterShare to FacebookShare to Pinterest
Labels: Quick and Easy, Side Dish

Mmm looks good! I also try to use up leftovers since everything is starting to become expensive.

This is so great! I love when you can make such wonderful meals from what's "left" in the fridge. Nice job!

I love clean out the fridge night, we've had some of our best meals that way.