Clean Out the Frige Stir-Fry 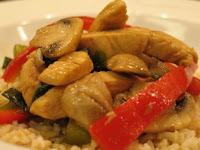 With the week quickly coming to an end, and not a moment too soon as far as I am concerned, it was time to go through the refrigerator and use up what was left. As I rummaged through my over-stuffed refrigerator, I discovered some nice button mushrooms, scallions and beautiful green and red bell peppers. They were all crying out - "Don't let me go to waste!" - so, I figured a quick stir-fry was in order. Since this was going to be a dinner based on what we had on hand, I decided to throw together a quick sauce to season the veggies and sliced chicken breast that I'd be stir-frying. I found a nearly empty bottle of Teriyaki sauce (about 1/4 cup left) and mixed that with just under a 1/4 cup canola oil... it still needed something because it had too much "bite" to it, so I mixed in about 2 tablespoons brown sugar... and then about 1 teaspoon of low-sodium soy sauce. It probably could have been a bit better with a touch of Hoisin sauce, but I was afraid the spice might mean a revolt by my two boys, so I left it out this time.
My youngest declared the chicken "yummy", my oldest was unimpressed... and my Husband thought it was good, but probably needed "something". I am thinking the sauce needs a bit of tinkering, probably add at least a smidge of the Hoisin sauce next time. Any suggestions? Post a comment on what might be good to try next time around.
Email Post
Labels: Poultry Stir-fry

Anonymous said…
Maybe do the sauce on the side this way you can vary the spice. Maybe some Chicken Broth and then corn starh to thicken it for the boys and add red pepper flakes to spice things up for you and the man of the house.

Patsyk said…
Hi, Bruce! Thanks for the suggestions. I forgot about adding cornstarch in my quest to make this quickly the other night, so I know that will make a difference... maybe I'll put a small portion of the sauce on the side with more spice as you suggested, but cook the rest with the chicken and veggies and see how it turns out.

Anonymous said…
Hey guys! I always keep rice wine vinegar, sesame oil and sesame seeds handy to kick up the flavor. A tblsp of the RW vinegar counters the sweetness and the sesame gives it more depth. I agree on the red pepper flakes too! Yum for the adults! Anya
February 02, 2008 11:28 PM

Megan said…
I love cleaning ouy the fridge and seeing what you end up with. I like the RW viniger and sesame seed idea that shyful4 had!
February 04, 2008 12:44 PM

Patsyk said…
Funny, but I did have rice wine vinegar and sesame seeds in my cabinet... but, totally overlooked them! I'll definitely see about incorporating those next time around.
February 04, 2008 7:29 PM