Warms the cockles (so to speak) - (recipe: Chicken Udon Soup)

Let me begin by giving you some background on the soup my Husband made tonight. He grew up on Southern NJ and they frequented a Japanese restaurant called Toshiro's. If you went there, you knew you were spending the evening "dining" as everything was made as the orders came in - nothing in advance - so, that would be your evening out. It was run by a husband and wife and was a small place in one of the many strip malls of NJ. The maki and sushi rolls were made as you ordered them and came out on beautiful trays that were stunning just to look at. A favorite dish of my Husband's (and mine once I was introduced) was Chicken Udon Soup. Not all Japanese restaurants make it the same, so going to Toshiro's always filled that craving of a warm and comforting soup. Unfortunately, they decided to get out of the restaurant business about 6 years ago, and we have sorely missed them.

Since they closed, we had tried to find another Japanese restaurant that made a similar soup to no avail. Then, one afternoon after a particularly rough night with our newborn, my Husband sent me out to the bookstore to see what I could find and have some "me time". I came home with the 15 Minute Gourmet: Noodles. It has some wonderful pictures throughout (although not for every recipe, which is always a disappointment to me, but more on that later). Immediately, one recipe stuck out as something we just had to try, Japanese Udon Soup. It had all the right components, but would it fill that craving? Oh, it did and it has become a Winter staple for us or as some would say something that "warms the cockles". 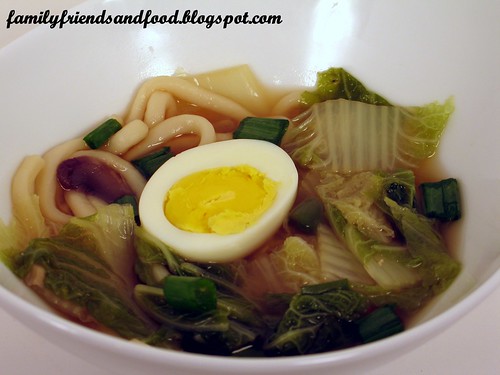 Bring a large pot of water to a boil over high heat; add the noodles. When the water returns to a boil, stir occasionally to separate the noodles. Cook for about 10 to 12minutes, or according to package instructions, until noodles are al dente.

While the noodles are cooking, pour the chicken broth into a Dutch oven or soup pot; stir in the soy sauce. Cover and bring to a boil over high heat. When the broth comes to a boil, stir in the chicken. Reduce the heat to medium; cover and cook, stirring occasionally, for about 8 to 10 minutes or until the chicken is cooked through. Remove from the heat.

When the noodles are done, drain well; add to the soup after the chicken is done. Stir gently over medium heat until the noodles are heated through. Adjust the seasoning to taste.

To serve, use tongs to transfer the noodles and chicken to soup bowls; use a ladle to add the broth. Sprinkle with scallions.

Makes 4 servings (according to the recipe, but we get closer to 8 large bowls)

Megan said…
I bought udon noodles for the first time, just yesterday. This looks like something the Gods must want me to try. Becouse here is a tasty looken recipe dropped in my lap!(And figure friendly)
January 17, 2008 5:09 PM

I'm happy I saw your question so quickly! You put the cabbage in a minute or so before serving... just long enough to wilt it. Hope that helps!
January 24, 2008 7:26 PM

Megan said…
Love the soup!!!
I can see this will be made many more times. Even my daughter liked it and thats a BIG thumbs up.
Thanks for sharing.
January 24, 2008 9:05 PM

Patsyk said…
I'm so happy you enjoyed it! It is a favorite of ours and we tend to make it frequently during the Winter months.
January 25, 2008 8:08 AM