Earlier this week, I told you about our whirlwind day in New York which included a trip to Little Italy and a Broadway show.

We try to take Our Boys to a show on Broadway once a year.  They are doubly lucky this year because their grandparents treated them to a show in the summer when they were staying with them.  While I didn't get to see that one, they had rave reviews of Peter and the Star Catcher... they would all highly recommend it.  In fact, they still talk about the show - and it was a couple of months ago!

What I can tell you about is the show we saw last weekend.  Annie was brought back to Broadway in 2012, and is in it's last weeks right now.  We had been talking about taking them to see it since it re-opened as we both have fond memories of this show. 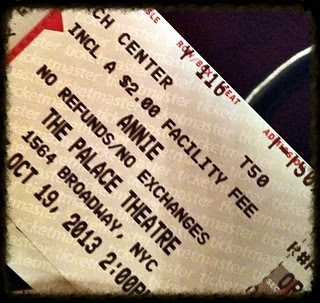 Since it can be so expensive to see Broadway shows, we often go to TKTS to see what discounted, same day tickets are available.  We choose a couple of shows that are on the board and whichever one has the best seats is the one we go to that day.  Many shows are discounted 50%, but not all shows appear on the board each day, so it is taking a chance doing it the way we do it.

Luckily, we were able to get 5 tickets together in the orchestra for the matinee performance last weekend.  We really wanted to take our niece to see a show while she was visiting, and this is a nice first show to see on Broadway.

Most of us know the story of Little Orphan Annie which was originally told through comic books, then a radio show... eventually movies and the Broadway musical.  Little girls by the hundreds (perhaps thousands) try out for the lead in the theater production.  Everyone wants to the be the red-haired star of the show.

While it seemed there were some sound issues at the beginning of the performance, they worked themselves out as the show continued.  Each song was performed as though it was the only performance of the day, each actor really put their all into the show - and there is an 8 p.m. performance each Saturday as well!

It was everything we expected, and while I can't say it was my favorite show that I've seen overall it was definitely a great show to see with the family.  My heart still belongs to Les Miserables and Phantom of the Opera, but the kids are not quite ready for those shows just yet!  My list of shows I want to see grows each year as Broadway brings something new each year.  There is just something special about seeing a live performance of a musical that moves you more than seeing it on a movie screen.

What are your favorite musicals that you've seen where you live?