Growing up, I loved a nice golden grilled cheese… very traditional; yellow American cheese between two slices of soft, white bread.  A bit of butter on each slice so that it would be toasted up golden before cutting in half to be savored for a simple lunch.

Now that I’m a bit older and my tastes have broadened, I like to make it more interesting. 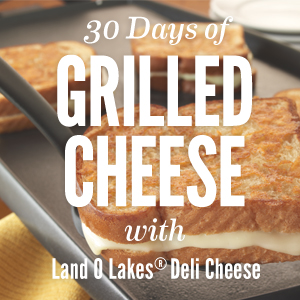 When Kitchen PLAY  asked if I’d like to join in with Land O Lakes to celebrate Grilled Cheese Month, I was all over that!  Ideas were swirling around my head and once I had some of the Land O Lakes ® Deli American Cheese, I settled on what MY grilled cheese sandwich would have in it. 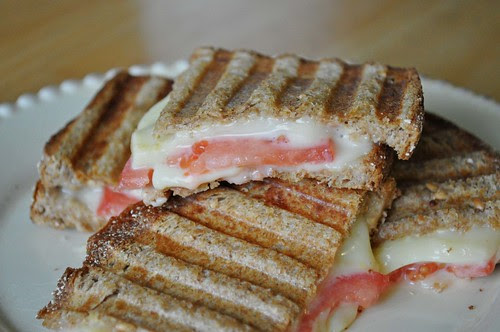 Land O Lakes® Deli American Cheese melts smoothly and is available at the deli counter so that you can have it sliced just the way you like it!  Those are just a couple of reasons moms love it and it’s the number one seller in America.

Not only do they offer white or yellow Deli American Cheese, but there is also a Land O Lakes® 4 Cheese Italian Blend that has Asiago, Parmesan and Romano cheeses paired with the white American cheese.  I’m going to be requesting that my deli counter add this as an option… so many ways this cheese blend can be used!  I’m already envisioning a pepperoni pizza grilled cheese sandwich!

For my grilled cheese, I chose to use thinly sliced plum tomatoes, Dijon mustard and Land O Lakes® Deli American Cheese – thinly sliced.  I now avoid soft, white bread (and boy, do I miss it sometimes!) so, I used my favorite whole grain bread instead.  Rather than use a regular skillet, I opted to pull out my Griddler and use the grill pan plates… with just a light spread of butter on each slice, it browned up nicely with just a slight crunch when I bit into it.

The cheese melted beautifully into the Dijon mustard and the sweet tomatoes contrasted so nicely with those flavors.  It would pair perfectly with a steaming, hot bowl of tomato soup or perhaps a nice potato soup instead.

You’d think it doesn’t get better than this, right?  Oh, but it does!  I love when companies like Land O’Lakes, who have been around for over 90 years and producing a quality product, decides to give back!  And, you can help them do it!

Pin a Meal.  Give a Meal. To help Land O Lakes give back, all you have to do is go to their website, www.landolakes.com, and pin recipes that look delicious!  For every recipe pinned or re-pinned, they will donate $1 to Feeding America!!  That one pin will feed one hungry family 8 meals!  Then, every time the recipe gets re-pinned it’s, another 8 meals!  Let’s help giving go viral!

Do you have a Pinterest account?  If not… I don’t know how you have resisted!  It’s such an easy way to save recipes and various other ideas you want to keep track of all in one place!  You can find me on Pinterest at famfriendsfood, come one… you know you want to help a hungry family get the help they need!


Disclosure: This post was sponsored by Land O Lakes as part of the Kitchen PLAY sidecar series.  All opinions given are my own.