On a recent rainy Sunday, we did something different.  We went out to eat at a restaurant.... not a fast food place where we could grab something and go, but rather a place to sit and enjoy a casual meal.

My Husband had been to Rattlesnake Ranch Cafe recently with friends from work for lunch.  As we were driving along, on this Sunday trying to decide what to do about lunch we decided to give it a try as a family.

It is worth noting that on Sundays they do not have their usual weekday lunch menu, which means the dinner menu is what you will be ordering from.

On this particular Sunday, they were not busy at 12:30, but I'd attribute that to the lazy, rainy day.  If I didn't have to be out running errands that day, I don't think I would have been out for lunch either.  This meant a quiet restaurant with another couple of families in there at the time we were there. 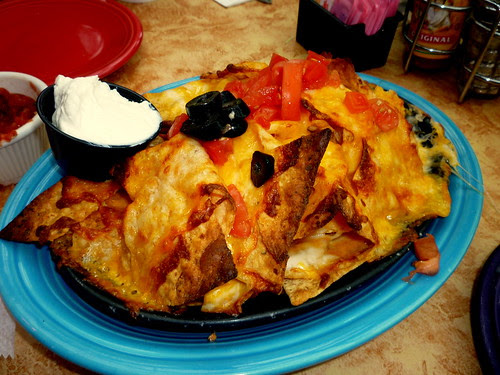 The kid's menu has a nice selection with their own appetizers available.  Would you believe that the nachos in the photo above are the kid's appetizer?  They were huge!  And, the cheese was not just melted on top... it was melted in between the layers of chips.  These were some pretty darn good nachos for the kids to dig into.


The menu has a distinct Southwestern flair, which is fun and fortunately appeals to everyone in my family.

My Youngest ordered the beef tacos - and it's important to tell them ground beef versus shredded beef if your kids have a preference.  If you don't ask, they will get the shredded beef, our server was nice enough to let us know this as we were ordering. 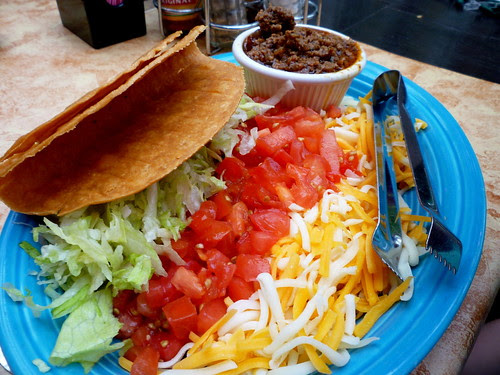 The best part was that My Youngest could assemble the tacos exactly the way he wanted them!  Again, the portions were huge and much more than he could manage to eat.

My Oldest opted for the kids beef burrito, which is buried under the lettuce, tomato and black olives in the picture below.  He really enjoyed the burrito, but I think he expected it would be one he could pick up and and eat rather than having to use a fork and knife to eat. 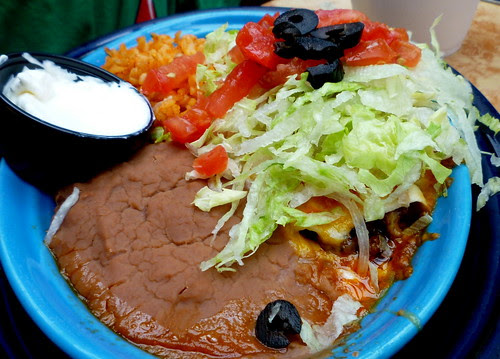 I opted for the Portobello Mushroom sandwich which had been marinated in balsamic vinegar prior to grilling.  It was delicious and full of flavor!  I must also say that their seasoned fries were hard to stop eating!  Perfectly crispy with the soft potato center, and seasoning that was full of flavor but not over-the-top. 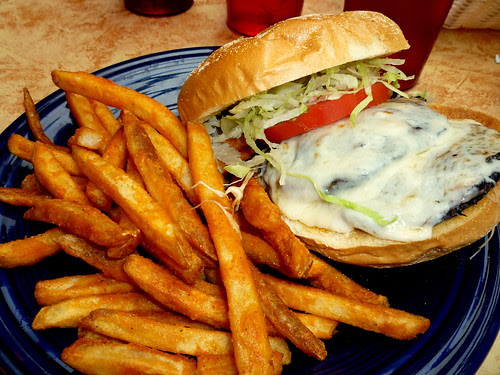 Finally, My Husband opted to have a sandwich made into a wrap (which they will do for any of their sandwiches, just ask) - he chose the Cajun chicken which is served with mixed cheeses.  The wraps are big enough for more than one meal, and he ended up taking half home to have for lunch the next day. 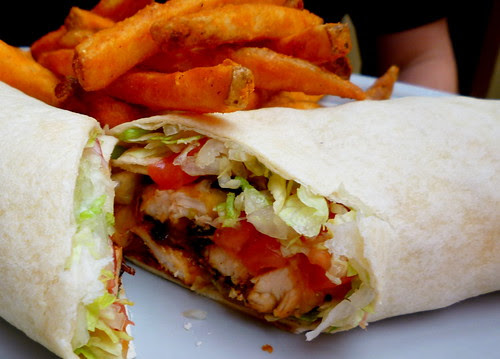 I think next time we go there, I'll ask for my sandwich as a wrap as well.  I just didn't think that the marinated portobello would hold up well for lunch the next day.

Overall, the food was fantastic and servings were beyond huge.  As I said earlier, the kids portions were more than adequate and if you have a growing boy that is always an added bonus.  The prices are pretty reasonable for a sit-down, casual restaurant.

If you are in the area, I'd suggest stopping in for lunch or dinner if you can.  It's a family-friendly restaurant that is casual with good food for a good price.  You can't beat that!

What a fun family outing! The food looks awesome...especially those fries!

Dining experience for there was not so positive.

1. food took a long time
2. It was cold when it got to me
3. Staff was not attentive
4. Food was just plain awful
5. They shorted me on the change back when I paid bill
6. when I complained to the -- lets just say he was not very "lucid".

I will never go back there again.

I'm sorry your experience was so awful. We've been there several times and never run into those same issues. Perhaps you should contact the management and let them know what went wrong for you so that they can try to fix it.