I bought Ellie Krieger's The Food You Crave almost a year ago, and have been thrilled with every recipe I've tried. They have been quick, simple and healthy. Something I try to incorporate on a regular basis (holidays are the main exception). When I first read through the cookbook, I went through and marked all the recipes that sounded interesting. One that I had marked was the Sage Rubbed Pork Chops with Warm Apple Slaw (click HERE for the recipe).

The recipe sounded like a nice change from the usual baked pork chops that I frequently make. I also liked that it incorporated a side vegetable as a part of the dish. The recipe called for shredded Granny Smith apple, but I opted to do a fine julienne cut with my mandoline as it was faster for me to do it that way. I also cut back on the slaw portion since I wasn't sure how well it would go over and didn't want to end up throwing out a ton of perfectly good veggies. 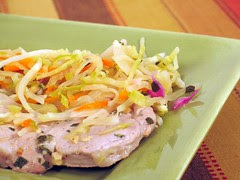 Obviously, my food "styling" (if you can call it that) on this dish is lacking. The pork chops were moist and had a bit of flavor from the prolonged time they sat with the sage mixture on them - got caught on the phone and they sat for at least 20 minutes rather than the 10 minutes suggested in the recipe. I would suggest doubling the mixture as I barely had enough to cover the 4 pork chops I had. I think the additional "marinating" time was a good way to go on this one. Otherwise you may end up with the flavors not really having time to marry together on the pork chops.

The slaw was just ok, nothing I could get excited about. This was disappointing to me as I am trying to add a bigger variety of veggie side dishes and this one just didn't cut it. The flavors were ok, but the apple got a bit mushy from being cooked so long. I think that adding it after the cabbage and carrots would be a better option so that it could maintain a slight crunch. That would be more appealing to me. I think I'll just search for another side option if I make this one again.

My Husband liked the pork chops, but passed on the slaw (as I expected he would). My Boys ate the pork chops as well, but no rave reviews by any means.

If you like pork chops, here are a couple of recipes I found interesting and have bookmarked to try soon:

Soy and Pepper made Dijon-Honey Pork Chops for their New Year's Eve dinner. Simple and deliciuos.

Grumpy's Honeybunch was able to please him with Pork Chops cooked in Beer and Barbeque Sauce... sounds like a winning combination.

It looks so colorful and healthy too!

I'm enjoying her cookbook too. Be sure to try the Fish Tacos with Chipotle Cream. Our whole family loved those.

I think it looks fine, I would eat it right up! I love slaw...

I think the slaw looks fantastic!

I'm all over that slaw...and don't be hard on your food styling I think it looks very colorful!

Hi I found this cool recipe for Artichoke-scrambled Eggs Benedict. Has anyone ever tried it? Sounds good and I hope it is. Here is the link with the recipe and article. nice site to whoever created it.

Pats,
I find Ellie's recipes to be very plain, and nothing special.
However, YOUR food styling is great!

I love fresh sage, especially with pork. I'm sorry that the slaw wasn't very exciting. It sure looks pretty!

It's a shame you didn't like the slaw because I thought it looked pretty.

I have to get this cookbook. I keep seeing great recipes of hers around. I enjoy her show too!

I need a new pork recipe...will try this out!

I think you underestimate your food styling. Thanks for doing the review of Ellie Kreger's cookbook. I'm always on the lookout for new things (not that I need more cookbooks...it's an addiction really!)

Apple and pork make a fabulous couple! Your plating looks fantastic, simple can be beautiful! The only suggestion.. I would love to see bigger photos!!! Thus... allowing me to drool more!

I hope you are well, Mum told me it was getting cold back East in the US!!

I've heard great things about this cookbook. This sounds wonderful!